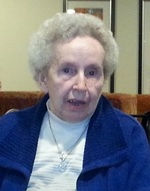 Peacefully at Extendicare Mapleview on Friday May 17, 2019 in her 89th year. Loving wife of the late Myril Williamson. She will be remembered by her children Debbie Cumming, James Williamson (late Bobbi), Gerald Williamson (late Molly) and Janet Callaghan (late Bill). Grandma of Adam. Predeceased by her parents Janet and James Kasubeck. Sister of the late Pat Williamson (late Gerald), late Albert Kasubeck (late Laura), late Juanita Egglesfield (late Doug) and Mildred Wieringo (late Donald). Aunt to many nieces and nephews. The family would like to thank the staff at Extendicare Mapleview Goulais Bay for the care given to their Mom. As per Joyce’s wishes, there will be no visitation or services. In lieu of flowers, donations may be made to ARCH.

All rights reserved. This obituary is also archived at obittree.com